Thursday, December 1
You are at:Home»Tech»All Action Alarm: Family-Run Business Safeguarding Long Islanders for 42 Years and Running
Share
The Hauppauge-based All Action Alarm first opened their doors for business in 1980, and the multi-generational, family-owned and operated security company recently celebrated 42 years of keeping Long Islanders and their loved ones safe in their own homes.
All Action Alarm has been a family affair since day one, with the father of current co-owners and brothers Brent and Craig Mele originally founding the company; the two siblings later would get involved in the business in the late 1990’s, and finally took it over from their father in 2017.
Brent noted that All Action Alarm refers to the extensive suite of services they offer as the “Umbrella of Protection,” meaning that no matter what you’re looking for in order to keep you and your family safe in your own home, All Action Alarm is more than capable of providing it.
“The type of services that we offer underneath that ‘Umbrella’ encompasses both residential and commercial security systems; video surveillance; and life safety systems such as fire, smoke, and carbon monoxide detection,” he said. “We also offer environmental security, including water damage detection – whether it is burst pipes, floods from sinks, or natural occurrences – and even temperature detection, especially low temperatures in the event that your furnace goes out and there’s no heat in the house.”
Brent also noted that All Action Alarm also specializes in automation-based security as well, when it comes to the residential clients. This includes thermostat control, remote control door locks, lighting, audio and video – including sound system and television installation – and much, much more. 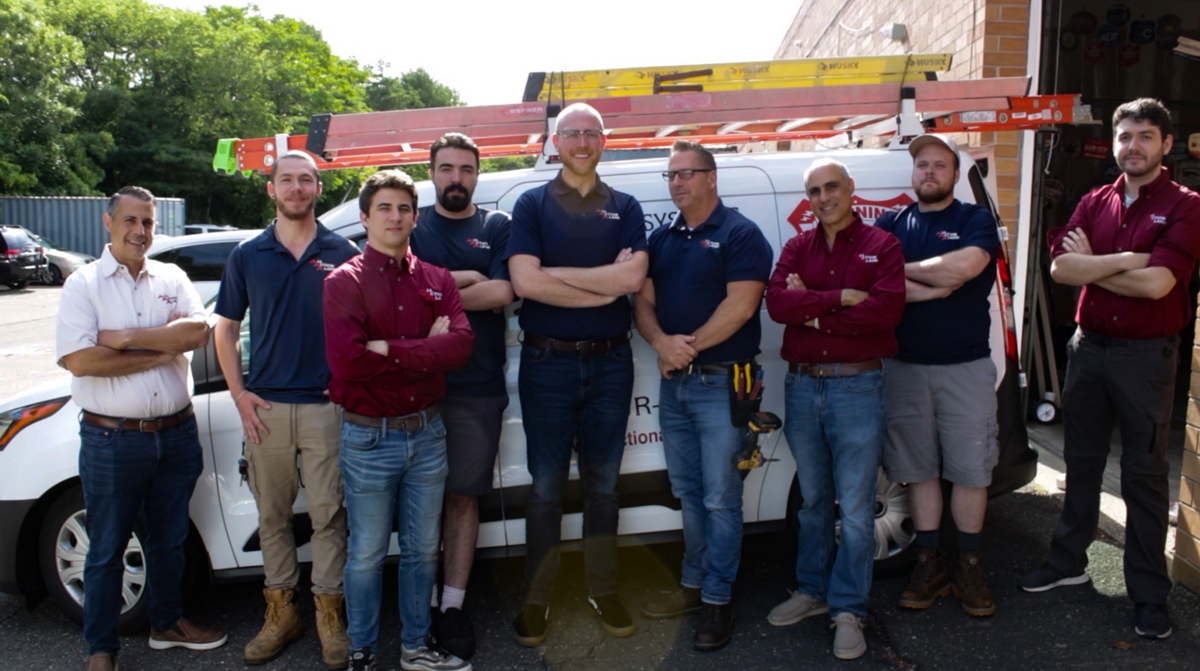 And on the commercial end of the business, one service in particular that has been gaining a great deal of popularity as of late, Brent said, is access control, which enables buildings and other installations to be made secure and to keep unauthorized personnel on the street where they belong.
“Access control is limiting the access into a building from outside people, which means having a key fob to swipe so that the door opens, so not just anyone can walk into your business,” he said. “It keeps out people who are not allowed in the building, unless they push a button and they’re buzzed in.”
Currently, All Action Alarm’s key service areas are Western Suffolk County and Nassau County; however, on occasion Brent says that his company has taken jobs In other areas as well, having ventured out into Queens, Brooklyn, as well as Eastern Long Island.
As anyone who has been keeping up with the news as of late can tell you, one of the number one concerns among people – both on Long Island and across the nation – is the rising crime rates that have been keeping people perpetually looking over their shoulders as of late. Having worked in the security field all of these years, Brent has noticed an evolution in the criminal element on Long Island, and said that there’s probably no better time than the present to fortify your home or business with a quality security system.
“The biggest problem we’ve seen lately on Long Island is the drug problem, which causes a lot of crime. A lot of these drug addicts are breaking into homes and businesses, and this has become especially worse in the last 10 to 15 years,” he said. “A lot of kids have gotten hooked on opioids, and they just don’t care. They’ll just break into anywhere, grab what they can, and it doesn’t matter if it’s a good neighborhood or a bad neighborhood. That’s the biggest change that has been noticeable on Long Island over the years.”
Brent also noted that the current perception of the criminal justice system as being “soft” on crime has also emboldened many crooks, who currently feel like there are little to no consequences for breaking the law.
“A lot of these criminals feel like there’s not nearly as many repercussions as there used to be, and as a result they’re getting more brazen and they’re trying their best to get whatever they can take,” he said. “Thankfully, the Suffolk police are really good, but things in New York City have been horrible because of all the leniency when it comes to crime. But here in Suffolk, the police have been on top of it.” 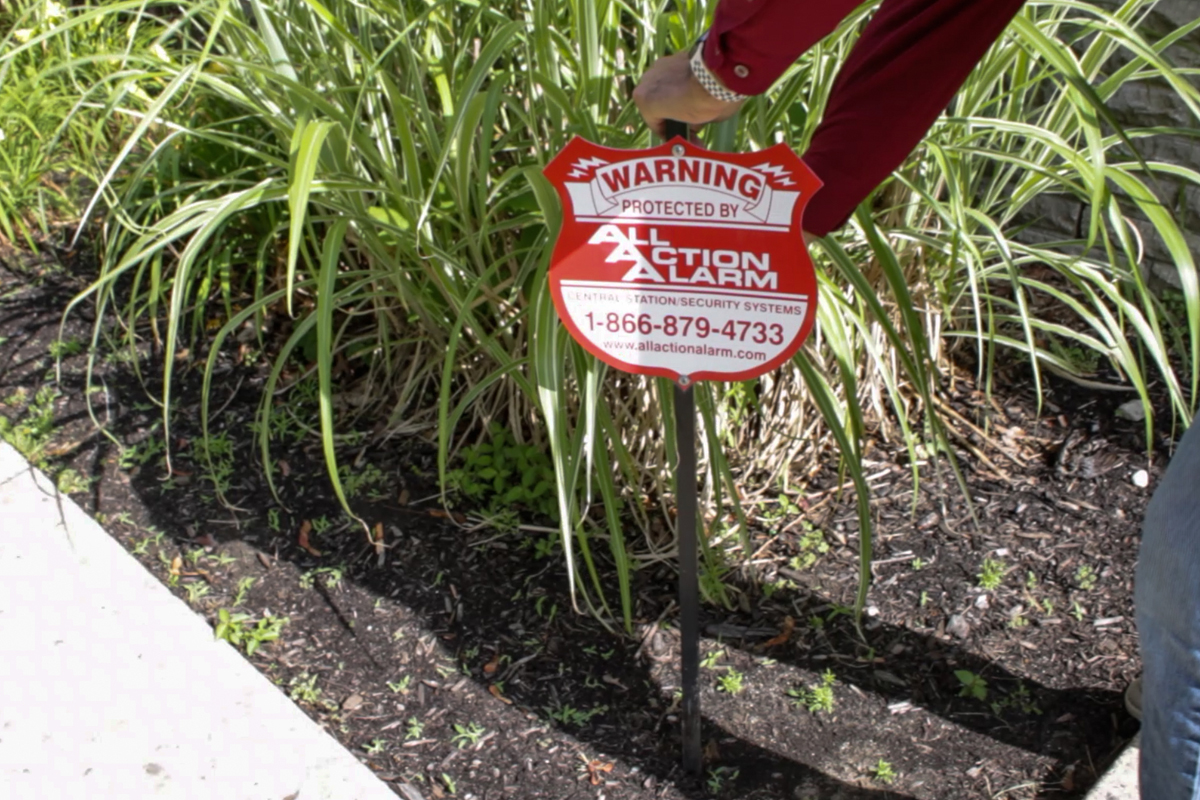 However, due to rising crime rates, Brent said that All Action Alarm has seen a serious uptick in business as of late, as people want to do whatever they can to keep their homes and their families safe.
“We’ve been getting a lot of calls from areas that haven’t had crime, and now they’re calling us and saying that just the other day, someone broke into the house down the block,” he said. “So it’s happening more and more often in areas that haven’t seen it before.”
However, All Action Alarm isn’t just about installing a myriad of security systems in your home; they’re also taking steps to create safer communities as well through a new Facebook group that they created that essentially acts as a social media-based version of the old Neighborhood Watch.
How the Facebook group works is that All Action Alarm customers can join it and share information with each other about criminal incidents or shady characters that they observe in their neighborhoods, Brent said, which allows people to band together and watch out for one another.
“We’re trying to get our customers to join that page so that they can collaborate on what’s going on in their area,” he said. “This way they’ll be able to keep each other informed, and have a common thread of All Action Alarm being their security company.”
All Action Alarm also offers free consultations and estimates, and can recommend specific, custom security systems based on their customers’ exact needs, as opposed to simply churning out the same exact coverage for each client without regard for their individual circumstances or lifestyles. Do you have pets? Children? Do you travel often? Are you disabled? All Action Alarm can design a security and access system tailored just for you.
Brent noted that he feels a great deal of pride in the fact that he and his brother had successfully taken over the business that their father started 42 years ago, and have overseen a new period of evolution and growth that ensures that All Action Alarm will remain in the family for generations to come.
“It’s been an honor. We’ve worked very hard since my brother and I were brought into the business to grow it, and we’ve seen a lot of changes here on the Island over the years, and it’s just nice to know that we have made a difference in people’s lives by protecting them against fires or break-ins,” he said. “It’s been nice over the years transitioning from first generation to second generation…I mean, we have clients who have been with us since the very beginning, and I’m very proud of that.”
To find out more about All Action Alarm, please call 631-549-7225 or visit their website at https://www.allactionalarm.com.
Have your Security System installed by All Action Alarm and receive our Superior 115% Guarantee. If you’re not completely satisfied with your security installation within the first 3 months, we’ll give you an unconditional refund of your installation and remove all of your equipment for free. We’ll also give you a $50 gift card for your troubles.