Wednesday, August 10
You are at:Home»Entertainment»Long Island Talks- New Video Interview Series Gets to the Heart of What Makes Long Islanders Tick
Share
In this day and age where quarantining yourself in the face of a pandemic can lead to feelings of isolation, there’s something to be said about somehow retaining a connection with the outside world. One Long Island man is giving people the ability to stay connected with the surrounding Long Island community in a safe and compelling way- via your computer screen, in the form of a new interview program entitled Long Island Talks.
Kevin Wood is a lifelong Long Islander and host of Long Island Talks (www.longislandtalks.com), an online video-based interview show that focuses on local personalities, events, and points of interest, providing an in-depth and personal view into  what makes Long Island so unique and special.
“Long Island Talks focuses on a broad audience. It’s centered on just about anything of interest having to do with Long Island and Long Islanders,” he said. “I like to use a series format, which gives me the ability to compare and contrast viewpoints from different people from across the island. Currently we’re doing a series on the local food industry during the pandemic; the next series will be on finance mortgage.”

Wood’s day gig is serving as the Parking Administrator of the Village of Port Jefferson; however, he’s also been involved in various media-related pursuits on the side for quite some time. He’s spent a number of years behind the camera, but more recently decided to get into the picture himself, initially producing and starring in an interview show – entitled Port Jeff Pulse – focusing on personalities and businesses in his local town.
After several years establishing a very real presence in Port Jefferson – to date, he has filmed over 250 Port Jeff Pulse episodes and counting – Wood decided it was time to expand his scope, and in partnership with LongIsland.com, he created Long Island Talks in April of 2020.
“The move to LongIsland.com allowed for a broader audience,” he said. “The owner, Andrew Hazen, and I have a lot of things in common and we both felt that the show would be a great fit.”

Long Island Talks typically puts out two episodes a week, available for viewing on Facebook. In addition, you can click here to subscribe to Long Island Talks‘ YouTube channel.
Interviewing people is clearly in Wood’s blood; ever since he was a child, he’s been interested recording people’s innermost musings and really finding out just what makes them tick.
“When I was 7 or 8 years old, I got a tape recorder for Christmas and I immediately started interviewing my brother and sister ad nauseam,” he said. “Later on in college I did a radio program, and it just went on from there. In many ways it’s in my blood…it’s something that I’ve always been attracted to.”
The ongoing coronavirus pandemic necessitated a major change in Wood’s interview style for Long Island Talks; instead of having guests travel to his studio for filming, he’s been conducting split-screen Zoom video interviews instead. However, the remote format doesn’t negate the very real emotions behind his subject matter in any way, he said, especially when it comes to the impact that the COVID-19 has had upon his fellow Long Islanders.
“The pandemic came around just as I was starting in April, so I decided to do a series on one of the businesses that were suffering the most, and the local food industry is probably one of the worst hit by far,” he said. “It’s really hard-hitting stuff…I interviewed Matty Boudreaux of Green Hill Kitchen in Greenport, and he could hardly do the interview from an emotional standpoint. These people are really suffering.” 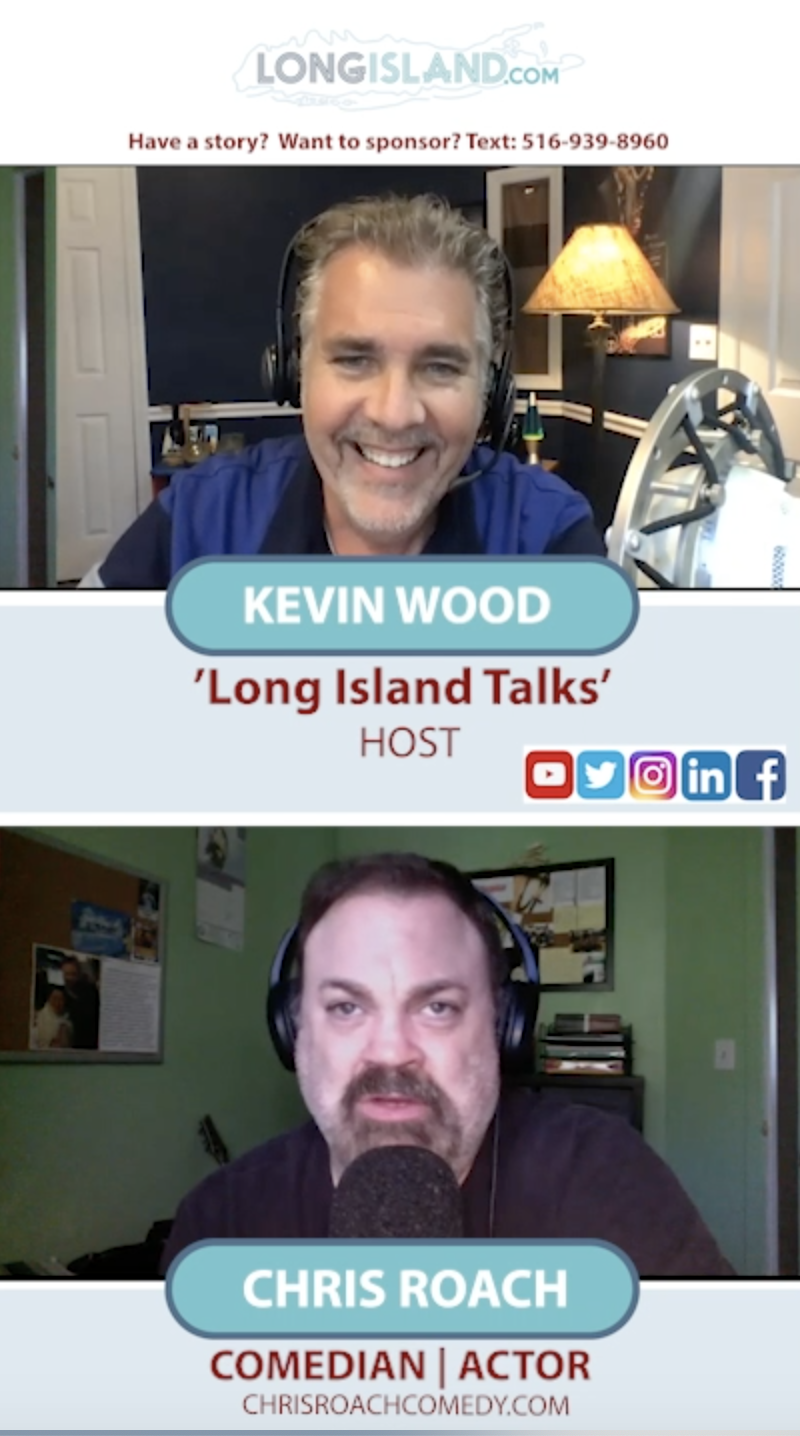 Wood noted, interestingly enough, that remote video interviews have opened up additional guest opportunities, since not everyone may be able to drive to his Port Jefferson-based studio.
As for the future of Long Island Talks, Wood said that once the pandemic is a thing of the past and he is able to return to his normal one-on-one, in-person interview format, he intends to continue to seek out new, interesting, and relevant news and subject matter pertaining to the Long Island community. And in the process, hopefully attract additional sponsorship opportunities that will help propel the program to the next level as well.
However, in the end, Wood said that getting to indulge one of his great loves over the years – interviewing interesting people from all walks of life – has provided him with a great deal of satisfaction. And with the debut of the new Long Island Talks program and the added scope that his partnership with LongIsland.com brings with it, he can’t wait to see what comes next.
“Over the years of doing my programs and doing live events, I’ve gotten to know a lot of people and that experience has given me the ability to be able to reach out and get guests…I’m established, they know I’m not just a fly-by-night operation,” he said. “But more importantly, it’s really cathartic to be able to do this…human beings need food and water, but they also need communication, and some more than others. And it’s cathartic to be able to give that to them.”
Be sure to check out Long Island Talks for the latest episodes, and click here to subscribe to their YouTube channel.