Wednesday, August 10
You are at:Home»Small Business»Disappearing Inc. – the Northeast’s Leader in Tattoo Removal Celebrates New Expansion into Long Island
Share
It’s a boom industry and it has been growing at a rate of over 10% for more than a decade now. In fact, industry analysts think that growth will continue for many years to come. What is this incredible growth industry? Tech? Energy? Neither of those – in fact these stats are all about tattooing! Now commonplace amongst the young and old alike, getting inked is seen as a way of expressing oneself and displaying unique interests to the world at large.
Similarly commonplace amongst the tattooed, is laser tattoo removal which is expected to outpace even the incredible growth of the tattoo industry. Removal is becoming popular for all the reasons one would expect: visiting a less-than-skilled artist, having an ex’s name or the aptly named “job killers” which are tattoos in visible locations that can hinder one’s job opportunities or make them unable to join the military.
That’s where Disappearing Inc., the laser tattoo removal experts come in. 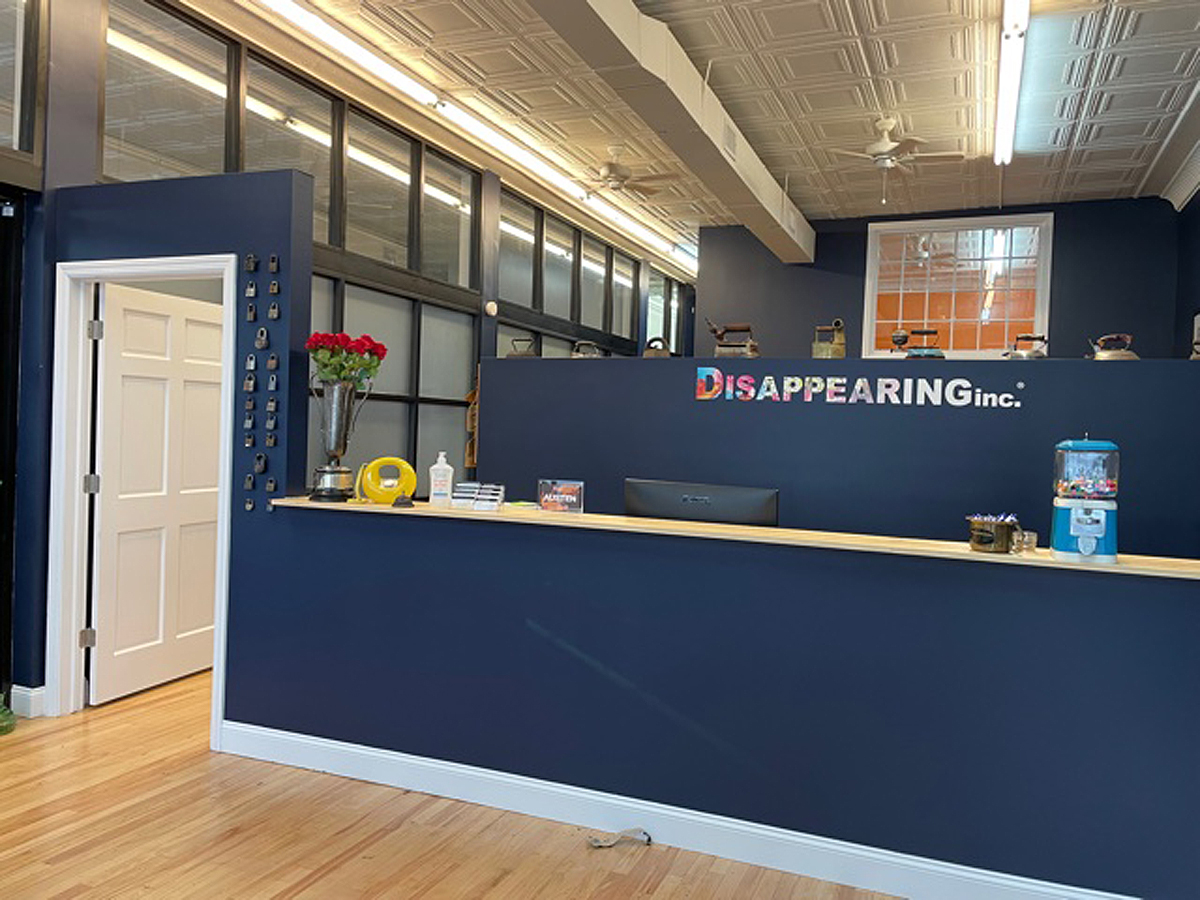 “We were one of the first in the country to do tattoo removal exclusively,” said Rob. “We love ink and are specialists in getting the ink out because we spend time with ink manufacturers and tattoo artists understanding what’s in the ink as well as how the ink is applied.”
The ironic part about Rob’s entry into the removal business is back when he first started, he was entirely tattoo-free himself; this is in direct contrast with his current appearance, where he is inked shoulder to knee.
“I now have many, many hours of tattooing on me,” he said. “I got my first tattoo because I felt it was disingenuous to work with people who all had one thing in common –tattoos – if I didn’t have that thing in common with them. So I got my first tattoo and just kept going from there.” 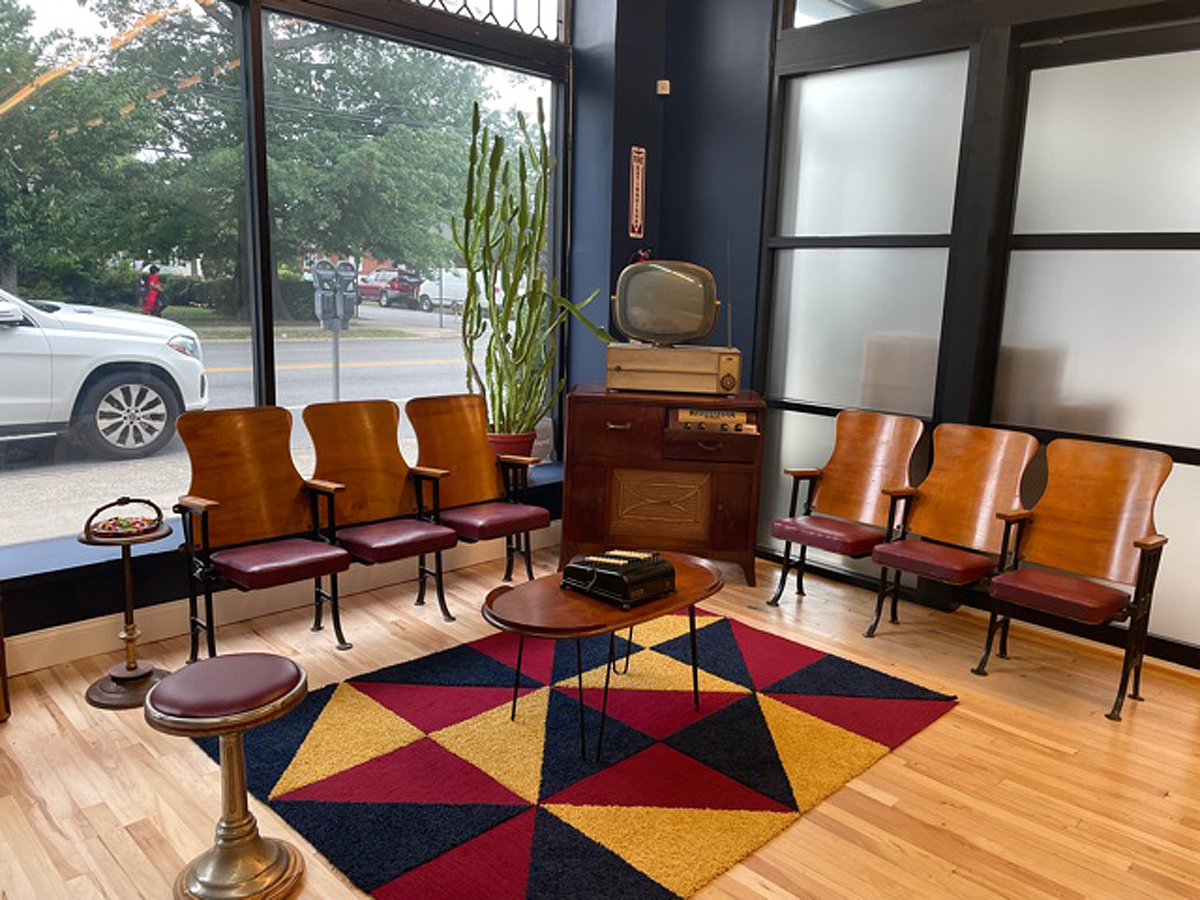 Harris even got a tattoo that said “Undo Your Tattoo” just so he could remove it to know what the process is like first-hand.
Harris has seen many evolutions of the tattoo removal industry in his almost 9 years.
“One question we often get,” explained Harris, “‘is ‘How well does laser tattoo removal work?’ Successful tattoo removal is all about results and we believe we are the experts. We can get off about 95 percent of tattoos, 100 percent of the time,” he said, referring to the effectiveness of their proprietary techniques.
“Interestingly, a good part of our business is also lightening up tattoos for cover-ups. We work with over 250 different tattoo studios, and when their clients come in and say that they would like a new tattoo over an existing one, we can do a few lightening sessions so when they go back to their artist they have a cleaner canvas with which to work and the tattoo doesn’t have to be bigger, darker and blacker.” 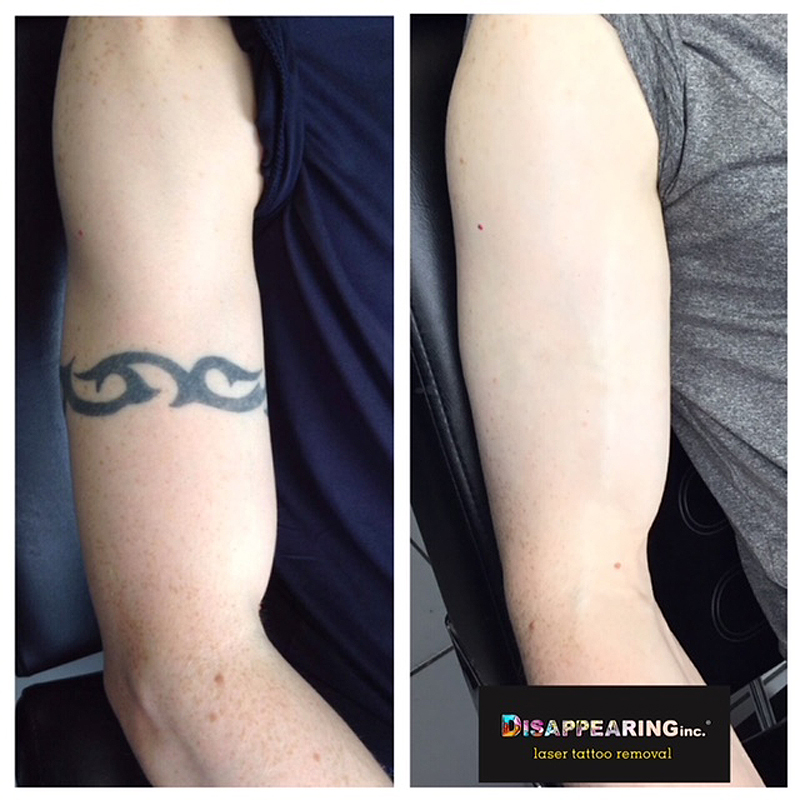 The average amount of time to remove a professionally-applied tattoo is approximately 8 to 12 sessions,  information which the techs at Disappearing inc. explain to every client when they describe the basics  and science of tattoo removal.
“When a tattoo is in your skin, the particles of your ink are too big for your body to do anything with, so they just stay there. What we need to do is to make those particles smaller and this is what the laser does.,” Rob explains. “Using the energy of the laser, we break up those big pieces into smaller ones. After that your immune system then becomes active and grabs all of those small pieces, runs them through your immune system, and expels the ink in your waste.”
“Most say the process of laser tattoo removal feels like getting a tattoo only quicker. Our process is much, much faster than getting a tattoo,” Rob said. “A tattoo that may have taken an hour or two to put on may take less than one minute to remove.” 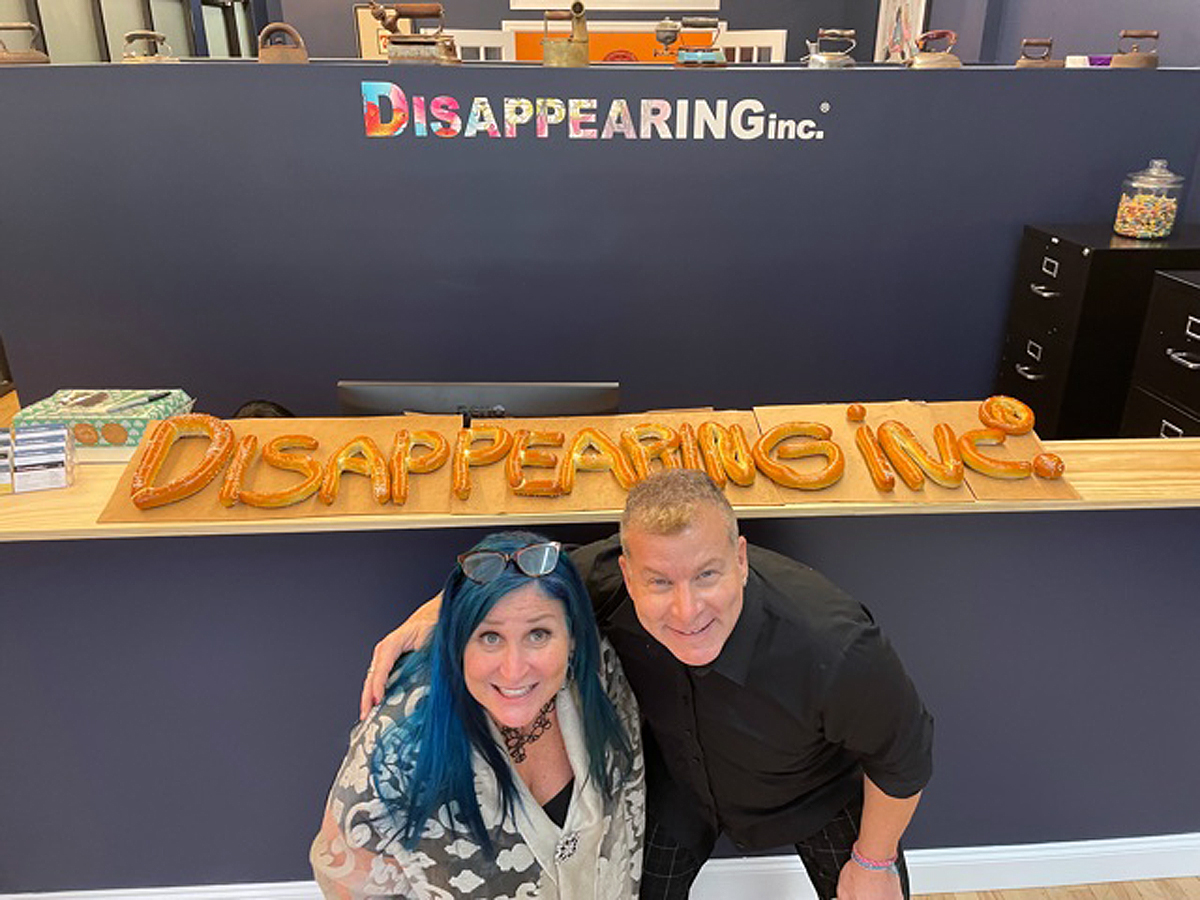 What’s more, Rob points out that to minimize any discomfort, Disappearing inc. techs use a device known as a Zimmer Cooler that blows air at about 20 degrees Fahrenheit, both before and during the procedure, which effectively numbs the skin while the tech is working on it. He notes, “most clients say it feels like a snapping rubber band.”
In order to do quality work, tattoo removal techs need an in-depth knowledge of the skin, ink chemistry and laser physics. At Disappearing inc., all technicians are rigorously trained and evaluated far before they ever get a chance to actually go to actually work on somebody’s unwanted ink.
“Our techs undergo a very thorough apprenticeship including over 400 hours of training both classroom and clinical. After that there’s a 100 question fill in the blank test and six months of ongoing mentorship, tracking and discussing every client case each day,” said Harris. “We, by far, have the most rigorous training in the industry.” 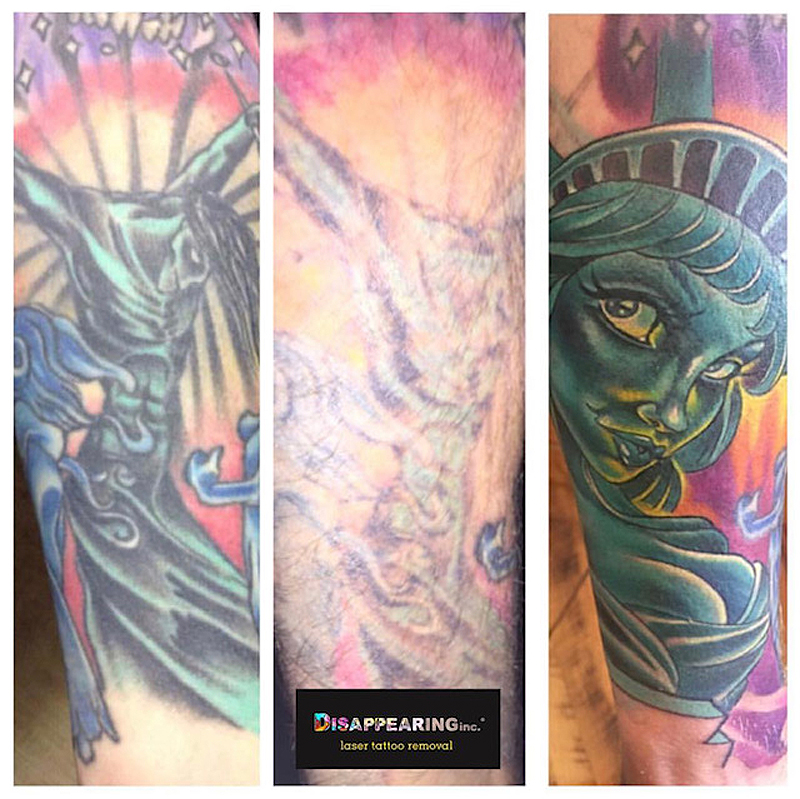 So far, reaction to Disappearing inc.’s new Mineola location has been excellent, Rob said, with customers  already lining up at the door before they even opened for business.
“Before it had even opened, I was literally getting out of my car to go into the Mineola studio, and a guy came up to me and asked ‘when are you opening? I need some help!’ He then showed me a tattoo that he had wanted to lighten,“ said Harris. “We are so excited that we’re here on Long Island.”
And even though he has a number of locations now – as well as a large selection of experienced techs manning those locations – Rob and his wife still personally work with clients to this very day; looking back, he noted that he made the right decision when setting out on the path of laser tattoo removal.
“I couldn’t be happier. The part I love the most is being with my clients,” he said. “There are times where we can really change someone’s life for the better by removing a tattoo so they can get into the military or get their dream job, being rid of an ex’s name to start a new relationship or clearing some ink that has prevented them from wearing a bathing suit or even short sleeves. We have a lot of clients that tell us that they haven’t worn a bathing suit or short sleeves in 10 years because they’re embarrassed about a certain tattoo. Tattoo removal can make someone feel like a new person and those are the stories that make me love to come into work every day.”
To find out more about Disappearing inc., please call 917-270-0010 or visit their website at https://www.disappearinginc.com.