Wednesday, October 20
You are at:Home»Entertainment»Chambers of Hell: New York’s Number 1 Haunted House Returns for Another Season of Frightful Fun
Share
This year, darkness has settled upon an unsuspecting building in Suffolk County, and any who dare to enter will finally emerge much later, shaken to their very core…and laughing from frightful delight.
Yes, it’s the return of Chambers of Hell, voted New York’s number one haunted house for the last four years running!  Located inside Matt Guiliano’s Play Like A Pro indoor sports training facility at 1745 Express Dr. North in Hauppauge, Chambers of Hell offers a unique and horrific view into the underworld, standing out when it comes to sheer creativity and decadent, bone-chilling insanity.
“Chambers of Hell has been around for nine years,” said Robert Frankenberg, the haunt’s Co-Owner and Creative Director. “We used to be Chamber of Horrors New York, and then we rebranded because we had another business partner that we parted ways with because we had a much grander vision, and since then we’ve really received a great many accolades.”
Chambers of Hell has been located since its inception inside Matt Giuliano’s Play Like a Pro, with Matt himself – who is a co-owner of the haunt as well – also serving as one of the Chamber’s “Hell Hounds,” a top-notch creative team that takes Robert’s depraved visions and translates them into tangible and terrifyingly all-too-real form.
“The Hell Hounds have been with us for about four years now, and they have really made a huge difference,” Robert said. “They’re the ones that I’ll go to and say, ‘I want to build a train. And I wanted to move.’ And they’re like, ‘we can totally do this.’ It’s such an amazing team I have.” 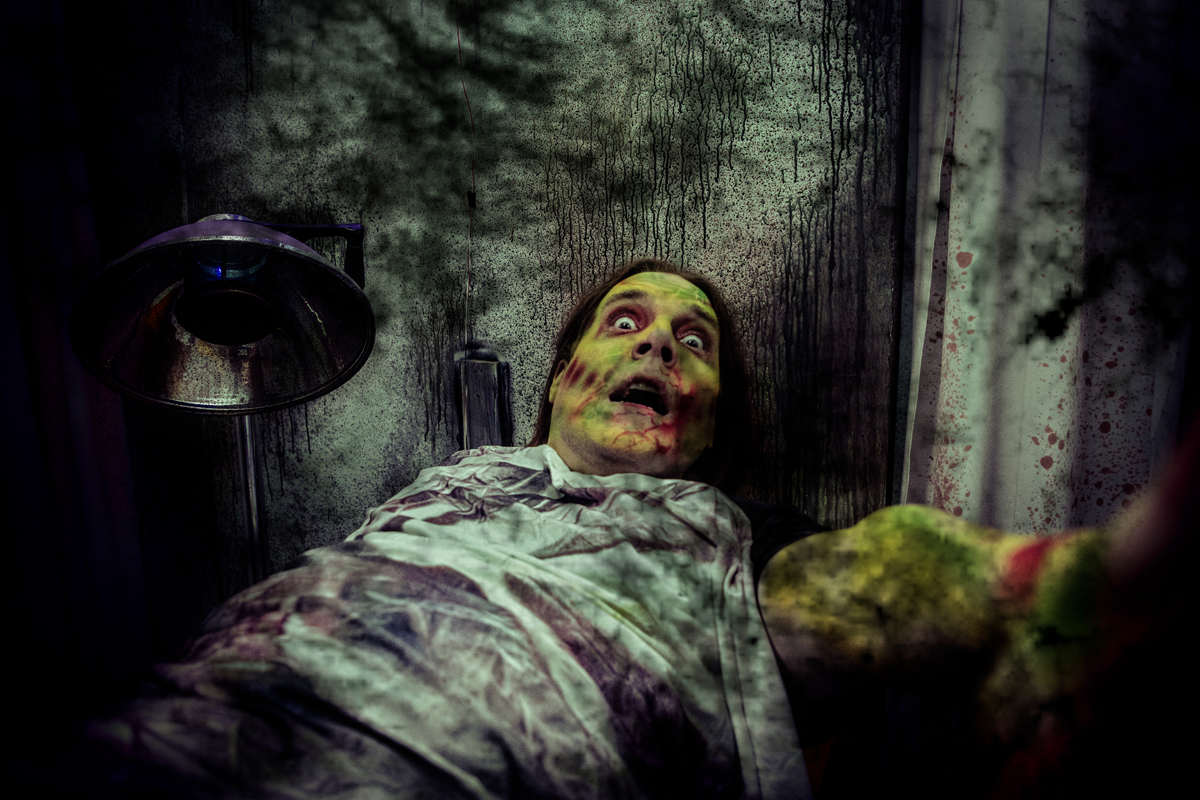 The Chambers of Hell is open Fridays, Saturdays, and Sundays every week leading up to Halloween night; in addition, they will also be open the last two Thursdays of the month – the 21st and the 28th – as well. Doors open at 8:00 p.m. on Fridays, 7:30 p.m. on Saturdays, and 7:00 p.m. on Sundays.
And being scared out of your mind has never come with such value before; unlike many haunts on Long Island, Chambers of Hell is made up of three fully fledged, lengthy, and in-depth haunted houses, and a low, low admission of only $35 a person gets you into all three.
During this year’s haunt, the Chambers of Hell will truly live up to its name by transporting you into three fright-filled scenarios, one right after the other:
Up first is Nightshade, which takes place in a secret laboratory located underneath the streets of Brooklyn, New York, where genetic experimentation on weaponized plant/human hybrids has grown completely out of control.
Next is Buried Secrets, which brings you – via an actual moving train car – into the abandoned subways, sewers, and catacombs beneath New York City, where you’ll be caught in the middle of an unholy war being waged between heaven and hell.
And finally, there is Slasher 74, which is set on Christmas Eve, where you enter the residence of a family of sadistic killers who kidnap unwary travelers and bring them home for the holidays. 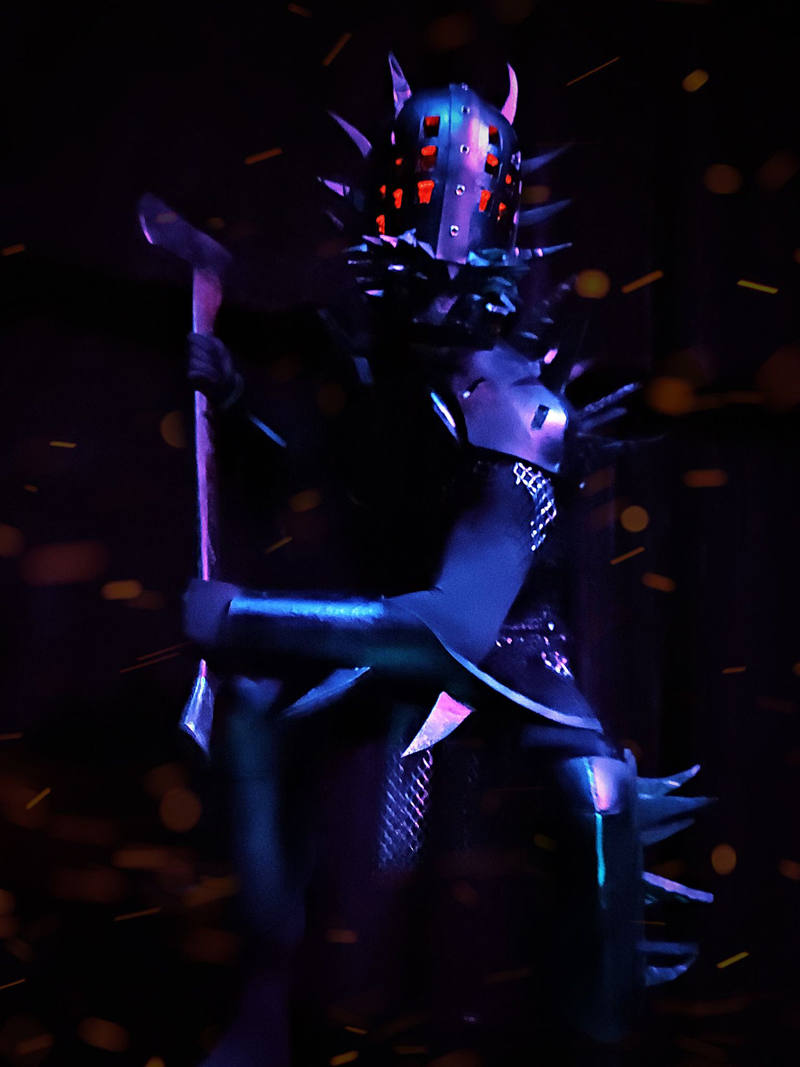 All three haunts are detailed, distinct from one another, absolutely disgusting, and definitely delivering more than their fair share of blood and gore.
While the COVID-19 pandemic created a great deal of hardship for many businesses across the country, it’s ironic that it actually proved to be a boon for Chambers of Hell. Robert noted that despite strict adherence to all pandemic-related protocols – including social distancing, limiting the size of groups, cleaning, and so on – their business was actually substantially greater than it had been in previous years.
“We took COVID very seriously, and for the haunted house, we were very interested in seeing what was going to happen because we have to start building the attractions as early as May,” he said. “That was when the pandemic was really kicking up and we didn’t even know if we would be allowed to open for Halloween. But we did four months of hard work, seven days a week, ten hours a day, and we only got the approval from New York State to open five days before our opening day.”
Rob noted that Chambers of Hell actually creatively incorporated CDC-recommended protocols into the haunt itself last year.
“We actually worked hand sanitizer into the storyline. Every person at each haunt’s entry point had hand sanitizer that we pretended was an antidote,” he said. “We went over and beyond. This year’s guidelines have loosened a little bit, but we’re still taking things very seriously.” 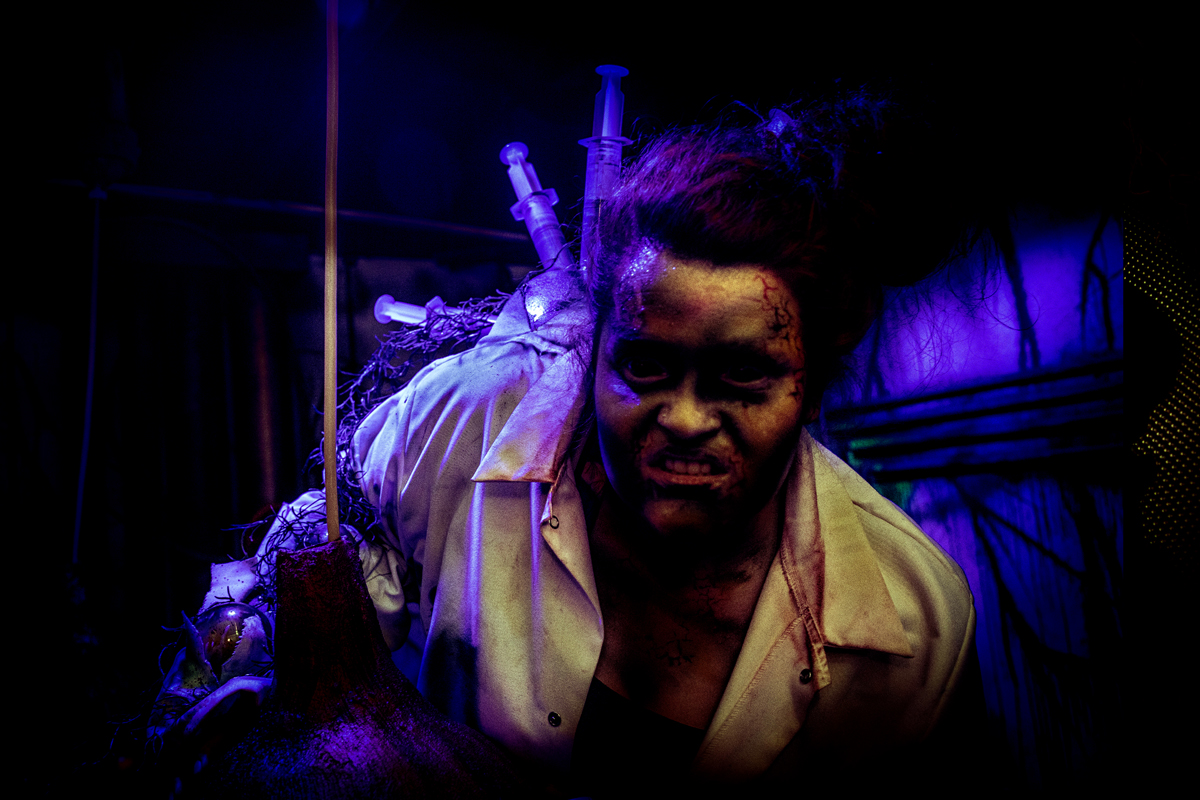 Robert pointed out that the number one question he gets asked is “Why are haunted houses so successful?” And after running New York’s number one haunted house for four years straight, Robert is obviously in the unique position to answer such a question with authority.
“When you go see a horror movie, for those two hours the world doesn’t exist. Car insurance doesn’t exist, divorces, nothing. It’s the same with a haunted house. The hour that you’re in our nightmare, nothing else exists,” he said. “It’s the ultimate escape. So when people came here during the pandemic, we had a big responsibility because we were the first thing in the entertainment industry that was allowed to be open.”
As for where he draws his inspiration from each year when designing his haunts, Rob noted that he is naturally a giant fan of all types of horror, and uses that to fuel his dark imaginings.
“I love all types of horror. I could love the goriest ‘Saw’ movie in the world, but I can also love a good black and white movie like ‘Nosferatu.’ For me there’s something to love about all of them,” he said. “I love ‘Silence with the Lambs,’ and I think it’s the best horror movie in the world because that could actually happen! I’m more scared of that than I am of Freddy Krueger! And I’m also a big Alice Cooper fan because I love his theatrics, and that’s something that we teach to all of our actors. There’s an art to being creepy.”
Chambers of Hell has achieved near-legendary status in spooky circles, having been voted the number one haunted house in New York four years running, and the 39th best in the United States…and that’s out of over 4,000 haunts nationwide! To be able to achieve that proves just how scary the Chambers of Hell is, and that’s a dastardly distinction that Robert says he is quite proud of.
“It’s amazing because to be able to be an artist for a living is a godsend. I have the best job in the world. I get to draw my imagination on a piece of paper and I get to walk through it every October,” he said. “Being a business owner, I have the power to hire whoever I want, to create the show that I want, and give people the escape from reality that they want. It’s really been amazing.”
To find out more about Chambers of Hell and to purchase tickets, please call 516-710-1845 or visit https://www.chambersofhell.com.