John’s Crazy Socks sells….well, socks. But if that’s all you think they do, you’re missing out on the big picture. According to John Cronin, the company’s Chief Happiness Officer, the company’s mission is a simple yet powerful one.

“Spreading happiness,” he said. And to that end, he has been wildly successful.

John’s Crazy Socks is a Melville-based, family-run business founded by father-son duo Mark and John Cronin that offers the world’s largest selection of socks- currently, over 2,000 different styles. The company employs individuals with differing abilities who pack each and every order that the internet-based business takes in, making sure to enclose candy and a hand-written thank-you note with each and every one. 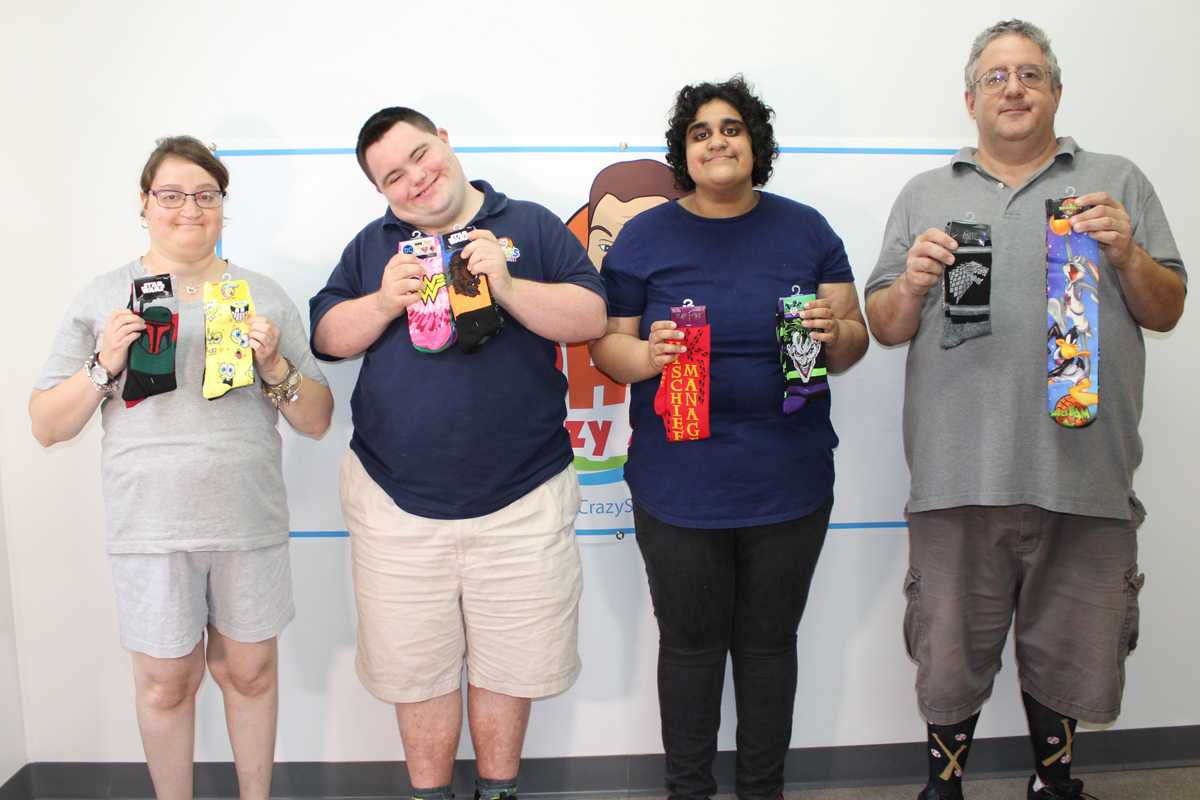 John Cronin is a lively and determined young man with Down Syndrome, something that he uses as a source of strength and motivation.

“Down Syndrome has never held me back,” he said. “I always say to follow your dream, follow your heart, and always work hard.”

According to John’s father, Mark, John’s Crazy Socks was founded as a collaboration between the two at a time in John’s life where he found himself at a career crossroads. At the time, John was attending Huntington High School and, coming up on his 21st birthday, was on the verge of aging out of the special needs program he was attending.

“For people with differing ability, their options once they turn 21 are usually very limited…there’s not much there. John looked and didn’t see anything that he liked,” he said. “But John’s a natural entrepreneur, he didn’t see a problem, he saw an opportunity.” 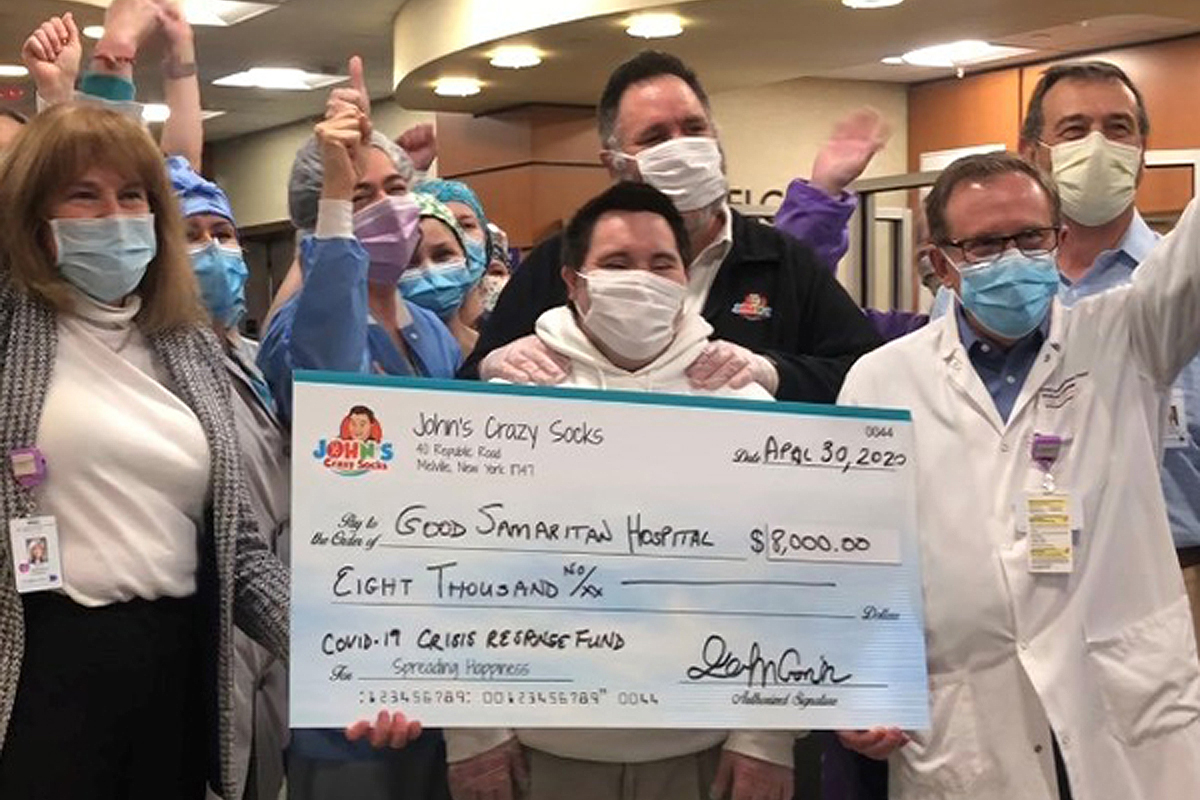 So John told his father that he wanted to go into business with him. He came up with a few different ideas, like a ‘fun store’ and a food truck, but then at Thanksgiving time he had his “eureka” moment.

“I said that I wanted to sell socks,” John noted.

John was a fan of crazy, colorful socks, and father and son decided to test the waters for this great new idea, utilizing an internet-based sales model. Building the new business from the ground-up as a start-up venture, they acquired inventory, built a website, and set-up a Facebook page for marketing purposes, featuring videos mainly of John talking about his socks. The videos especially proved to be a big hit and got the fledgling business a lot of attention.

John’s Crazy Socks first opened up for business on Friday, December 9, 2016, and right away got a flood of orders; 42 their first day, mainly from local Long Islanders who at the time didn’t realize the delightful treat they were in store for. To show appreciation for their patronage, their orders were boxed up with chocolates, thank-you notes, and early-on were actually hand-delivered to their doorstep by a grateful John himself. Customers were instantly charmed by this endearing young man, and soon word started to spread about this wonderful new business.

“Whole families would wait for John to show up and take photos…we had people re-ordering just to have him come back to their house. People started posting their pictures and videos on social media,” Mark said. “Within the first two weeks we had shipped 452 orders and had $13,000 in revenue. And we learned a few things…first, people want to buy socks! And second, they wanted to buy them from John! They found him very relatable and inspirational.” 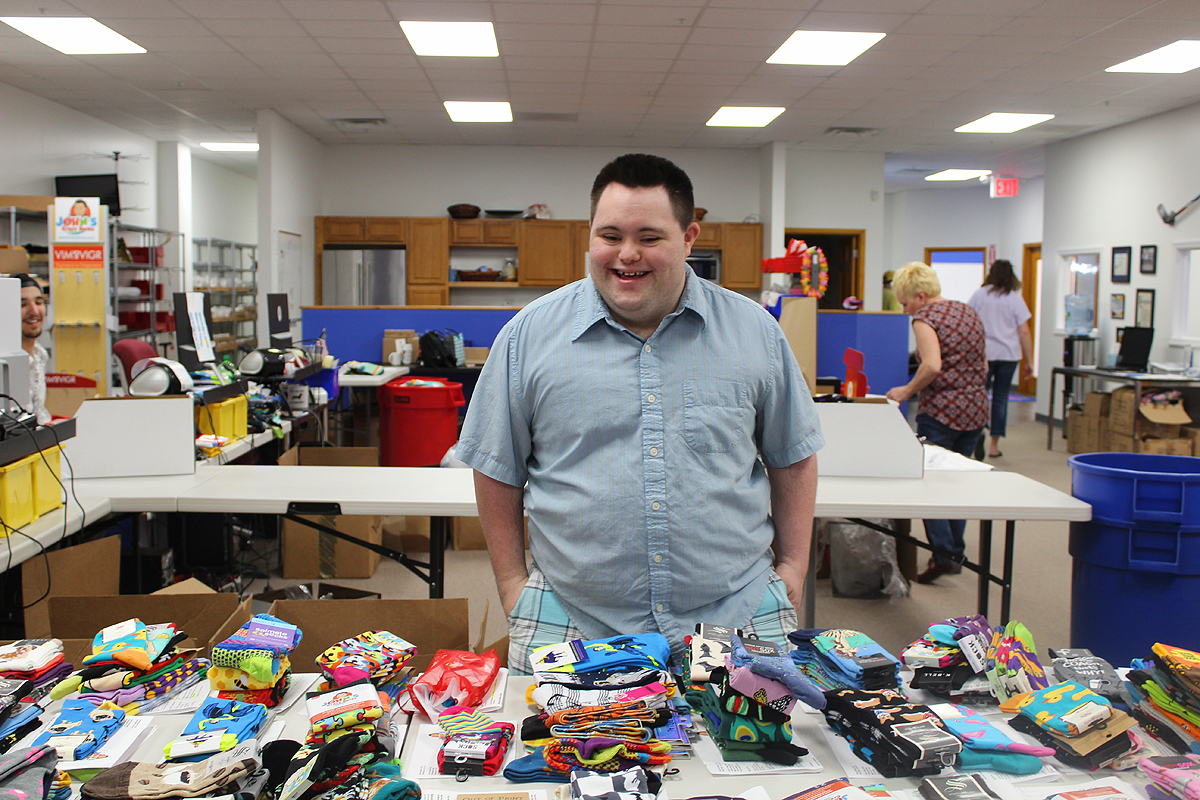 But John’s Crazy Socks isn’t just about selling socks- it’s also about spreading important social messages and supporting worthy causes. Five percent of their earnings is donated to the Special Olympics – John himself being a Special Athlete – and they produce awareness and charity socks with the proceeds going to various other causes, including Down Syndrome and Autism awareness programs.

Most recently, John’s Crazy Socks offered a line of “Healthcare Superheroes” socks to fundraise for the American Nurses Association and Good Samaritan Hospital Coronavirus Relief Funds in order to help bolster their efforts in combating the ongoing coronavirus pandemic.

“We introduced those socks two weeks ago, and we’re already raised over $25,000 for coronavirus relief. We have a social mission, and a business mission, and they feed off of one another,” Mark said. “We’re a content company as much as an e-commerce company, and we built the company on four pillars- inspiration and hope, giving back, socks you can love, and making it personal.”

As the business grew, they expanded their facilities, hired more workers to fulfill orders – more than half their employees have differing abilities – while maintaining the personal touch that had established them in the marketplace to begin with. In particular, utilizing the hard work of differently-abled individuals is a major contributing factor to the success of John’s Crazy Socks, Mark said.

“We do our own fulfillment…more than half our workforce is made up of people with different abilities that we call our ‘sock wranglers,’ and every person that works here has a sticker with their name and picture on it, and that goes on every packing slip,” he said. “And to this day every package still gets a hand-written thank-you note from John and candy. So if you get a package from us, you’re not just getting a package of socks…you’re getting a package of happiness.”

John’s Crazy Socks has continued to expand, offering a Sock of the Month club, gift baskets, greeting cards designed by people with differing abilities, and more. All orders are processed with same-day shipping – to over 80 different countries – which is a better track record than even Amazon.

“And Jeff Bezos isn’t putting a thank-you note or candy in his packages,” Said John.

In addition, the business has also expanded the scope of their charitable leanings as well, offering classes for students, gift box donations for auctions and raffles benefitting worthy causes, as well as sponsoring a $5,000 “Autism Can Do” scholarship benefiting those on the Autism spectrum to help pay for college or trade school.

In light of the coronavirus pandemic, John’s Crazy Socks – which has been designated as an essential business – has been allowed to continue to operate at a reduced capacity, so anyone interested in placing an order is encouraged to do so.

John’s Crazy Socks has seen a downturn in sales due to the pandemic as have so many other businesses, but that does not stop John and Mark. They are already bringing furloughed workers back on the job.
“It is so good to have my colleagues back,” John said. And indeed, their colleagues are happy to be back at work, not only for the income, but for the reinforcement and the social benefits they get from working. 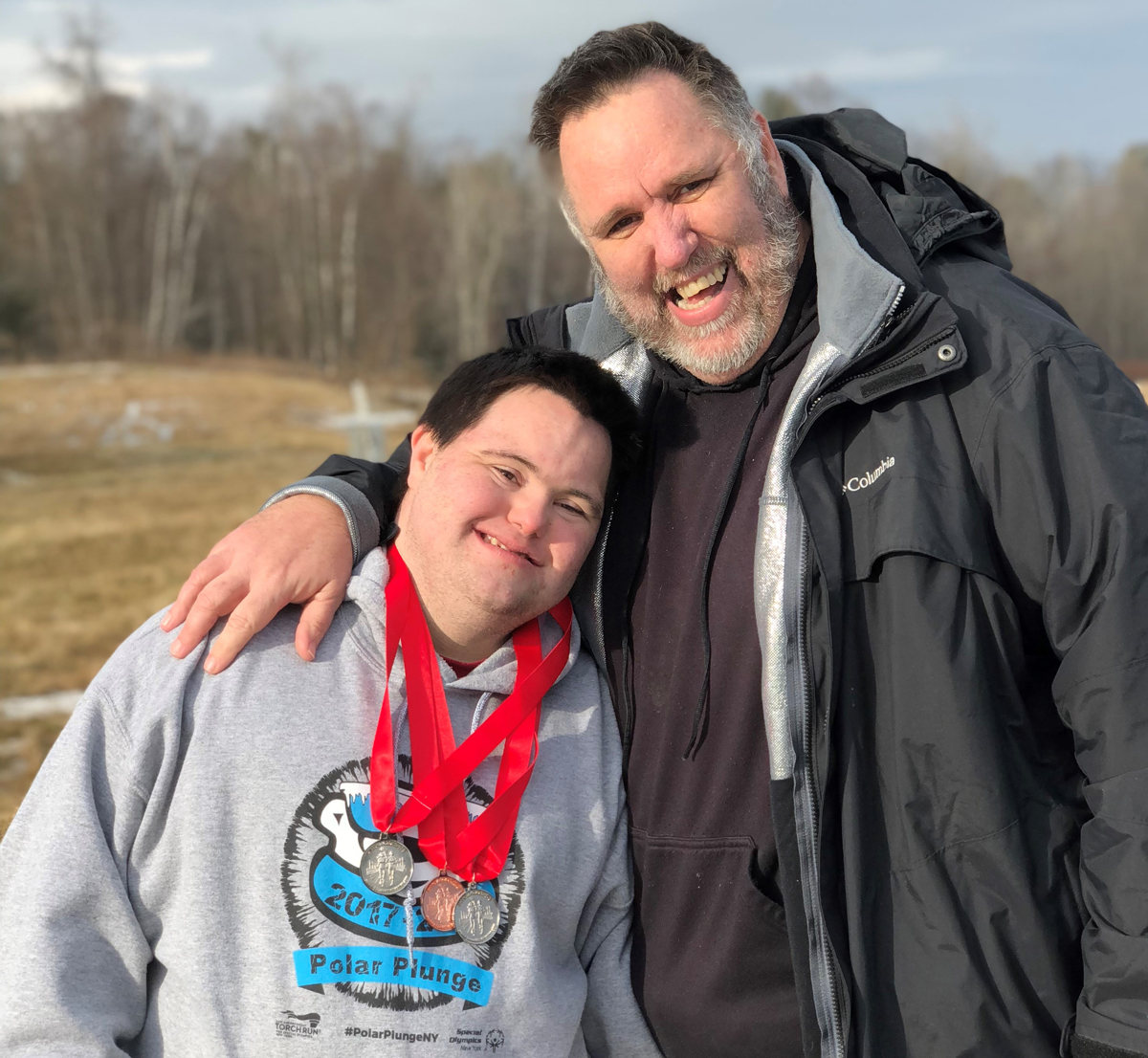 Mark explains, “A fundamental part of our mission is to show what people with differing abilities can achieve. We know that people with a disability face an 80 percent unemployment rate, and that was before the virus. We want to show that simply having a disability does not make one sickly and does not mean that one cannot work. As John likes to say, our colleagues are ready, able and willing to work.”

John’s Crazy Socks has created a safe work environment. They emphasize four elements of safety: screening, hygiene, wearing masks and social distancing. “Fortunately, to date, none of our colleagues or families have gotten sick,” says Mark.

Social media interaction with their customers and followers, especially during the pandemic, has also become increasingly important.

“The other day I hosted a dance party on Zoom, which was a lot of fun,” John said, referring to the popular video-chat app. “Also, three nights a week we do a Facebook Live show called ‘Spreading Happiness with John and Mark.’ That’s reached as many as 40,000 people.”

John’s Crazy Socks has garnered national attention, with father and son profiled by numerous newspapers and television news programs; John even became “sock buddies” with George H.W. Bush, with the two exchanging socks back-and-forth prior to the former President’s passing in 2018. 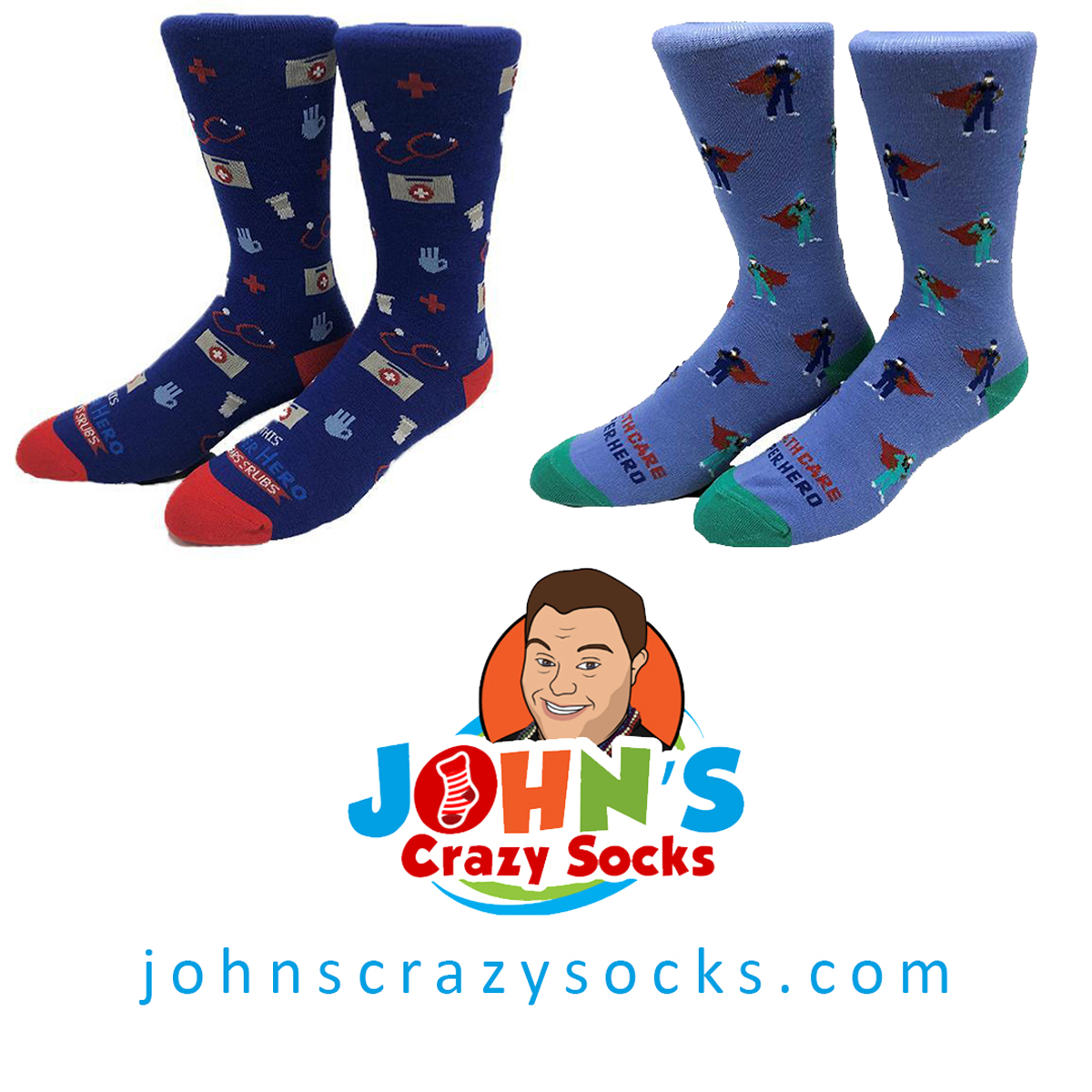 John and Mark even met with House Speaker Nancy Pelosi to discuss support for legislation currently making its way through Congress to ensure that differently-abled workers receive the ability to earn minimum wage employment. Shockingly enough, this is something that is currently NOT mandated by law, and the cause has received bipartisan support from Long Island congressmen such as Tom Suozzi and Peter King.

In the end, the success of John’s Crazy Socks is clearly two-fold; one, they have managed to take a novel concept and turn it into a money-making enterprise, and two, they have upheld and exceeded their commitment to the differently-abled community by providing employment, encouragement, and support wherever it is needed.

“We are incredibly fortunate…and we’ve made a promise to spread happiness, we’ve shown what differently-abled people are capable of, and we’ve had great support and great opportunities,” Mark said. “That creates an obligation on our part to take advantage of that opportunity to help fulfill our mission.”

Father and son both smiled when Mark added, “We’re just a couple of knuckleheads from Long Island selling socks, and all we want to do is change the world.”

To find out more about John’s Crazy Socks, you can visit the following: