Thursday, May 28
You are at:Home»Restaurants»Chik-fil-A Opening in Westbury
Share
Long Island is about to get a new Chik-fil-A restaurant.
Atlanta-based Chik-fil-A ,plans to open its newest Long Island location on Oct. 17 at 1530 Old Country Rd. in Westbury.
The company  already has Long Island restaurants not too far away in Garden City, Hicksville, Commack and Port Jefferson Station.
And this one is almost directly across the street from a Popeye’s, another restaurant that lately has been growing its sales thanks to chicken.
Scott Buccellato is the operator of the fast foot eatery known for its chicken, sauces and fans who travel fairly far to get to a franchise.
The restaurant initially hoped to open by late summer or early fall,  but needed additional time to finish with approvals and preparations, according to sources who said they were familiar with the original plans. 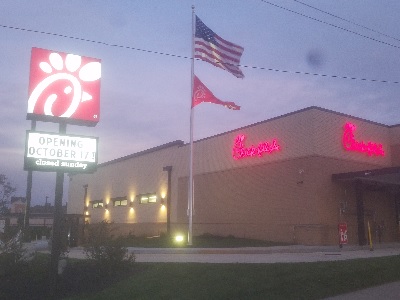 The opening of a Chik-fil-A restaurant is typically a big enough event so police officers will likely be stationed nearby during the early days, if only to manage traffic that could back up far past the restaurant’s parking lot.
The Chik-fil-A flag already flies above the restaurant, where another sign indicates that a count down to opening day has begun.
“Back to the future,” Louis Biscotti, the national leader of Marcum’s Food and Beverage Services group, said of the company’s success. “They buck the trend of technology by doing it the old fashioned way face to face on the drive-through lines. And although their wait time is longer than the rest, they get the highest customer ratings.”
The restaurant, which requires cars to pull off of Old Country Rd. in order to reach the restaurant, will remain closed on Sunday – one of its signature traits.
“Our founder, Truett Cathy, made the decision to close on Sundays in 1946 when he opened his first restaurant in Hapeville, Georgia,” according to the company.”Having worked seven days a week in restaurants open 24 hours, Truett saw the importance of closing on Sundays so that he and his employees could set aside one day to rest and worship if they choose – a practice we uphold today.”
Chik-fil-A has grown to 2,400 restaurants on streets, shopping malls, airports and college campuses across 47 states and the District of Columbia.
The company ranked fourth in the Harris Poll Reputation Quotient list of the 100 most visible companies in 2018, up from 25th the prior year.