Mamoun’s Falafel opened in a small, 200-square-foot Middle Eastern restaurant on MacDougal Street in Manhattan back in 1971. And for most of the time since then, it was part of history, as that block became a kind of Mecca for music. Mamoun’s was part of the Downtown scene. You don’t have to go to Manhattan to get Mamoun’s anymore.

The company has since expanded to nearly a dozen restaurants, recently acquiring the Long Island franchise location in Syosset from the franchisee.

Long Islanders can head to Mamoun’s without traveling to a Manhattan zipcode, as they find a restaurant filled with images of the eatery’s own past, its founder, and the food that helped make it a little restaurant with a big reputation. 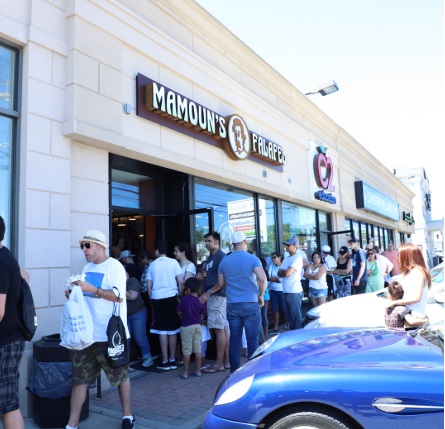 “In Long Island, every day we get MacDougal customers who still go to MacDougal Street,” Heather Koleser, head of franchise operations for Mamoun’s Falafel, said in the Syosset location. “Now they live on Long Island so they visit us as well.”

Mamoun Chater founded the falafel eatery that has become somewhat legendary and now includes a location at 408 Jericho Turnpike, in Syosset.

Led by CEO Hussam Chater, the company began franchising in 2016, picking up the pace recently.

Mamoun’s has grown to ten locations – including six owned by the company and four franchises. Two more franchises are under construction and two seeking leases.

Franchises are in Fort Lee, Wall and New Brunswick, N.J. and Philadelphia. A franchisee also signed a lease in East Rutherford, N.J.

The Middle Eastern menu including falafel, shawarma and baklava has won classic status. The falafel was dubbed among the Most Iconic Sandwiches’ by Eater NY.

It also made the cut in the book “1,000 Places to See Before You Die” and has been on the Food Network, Travel Guide Channel, The Rachael Ray Show and The Chew. 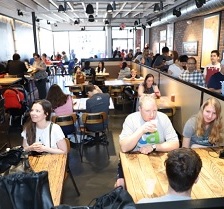 “The menu is the same in all locations,” Koleser said. “We modeled our new model off a design we have on St. Marks.”

A Mamoun’s is slated to open in Atlanta in late fall and in Staten Island in late fall or early winter. California and Chicago, here they come: Those locations are on the menu for next year.

“Most of our franchisees know us from New York City. Mamoun’s is known nationally,” Koleser said. “When we open outside of different markets, it’s surprising the number of people who know and love us and have been to MacDougal Street.”